50 years on
by Philip Eden

The recent torrential downpours have emphasised how powerful and destructive rainstorms can be, even in our equable climate. Occasionally, though, storms of truly tropical intensity strike, and the havoc which follows is all the more distressing and bewildering because of their rarity.

Fifty years ago this month one such catastrophe befell the small north Devon town of Lynmouth when, on the night of the 15th/16th, a tremendous deluge broke over Exmoor, floodwaters cascaded down the steep northern flank of the moor, and torrents of water laden with uprooted trees, boulders, and other debris tore through the town. "In the darkness of a single night," as the subsequent disaster appeal so starkly put it, "the village was left in ruins and 34 lives were lost." In all, 420 people were made homeless, 34 buildings were completely wrecked and 70 others badly damaged, 29 bridges were demolished, and 38 motor cars and several hundred trees were washed away into the oblivion of the Bristol Channel.

Heavy rain fell over the entire southwest peninsula as well as other parts of southern England, Wales, and the Midlands. But it was Exmoor that bore the brunt of the s torm with a fall of 229mm of rain spread over 22 hours recorded at Longstone Barrow, overlooking the headwaters of the West Lyn river. The subsequent Met Office report suggested that a little further east, in the vicinity of Simonsbath, as much as 300mm may have fallen - almost four months' worth of rain in 24 hours.

Last August a tendentious and flawed documentary programme on BBC Radio 4 sought to blame the disaster on "secret" cloud-seeding experiments which were being conducted in the UK in the early 1950s. There was in fact nothing secret about the seeding programme which had been widely reported at the time, and in any case the physics of cloud seeding confines the usefulness of this artificial rain-making technique to small cumulus clouds. The depression which brought the rain on August 15-16 1952 was several hundred miles across and the rain was caused by prolonged uplift of moist air over a broad area. Even if it were possible to seed such a large weather system, there simply would have been no point as it was already producing widespread heavy rain before it reached our shores. 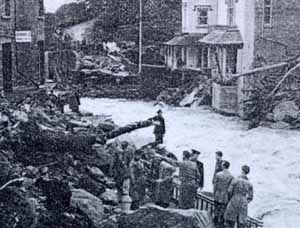 Could it happen again? Well, it happened before. Destructive floods following rainstorms of similar magnitude had wreaked havoc in Lynmouth in 1607 and 1769, and in July 1969 fears were raised of a new flood following a two-day downpour. Meteorologically it is virtually certain that a storm of similar proportions to that of 1952 will occur over Exmoor sooner or later. With warmer seas off our coasts - a consequence of global warming - it will probably be sooner rather than later. Nowadays its intensity would be predicted with some accuracy and warnings would be disseminated in good time, while the flood mitigation scheme devised after the flood of '52 should reduce the likelihood of catastrophic damage.